We’re all in this together? 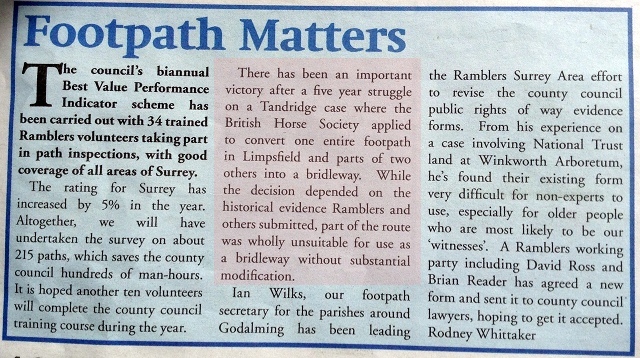 The south-east regional newsletter of the Ramblers carried this short article in 2014, with the highlighted passage about Tenchleys Lane, a claim for a bridleway on the Surrey/Kent border near Limpsfield Chart made by the British Horse Society.

A disinterested bystander might reasonably assume that all organisations promoting the use of rights of way in the countryside would be equally trenchant in promoting claims to record rights of way previously omitted from the definitive map and statement (the official record of such things). And in the sense that the Ramblers, the British Horse Society, the Trail Riders’ Fellowship and others all bring such claims, the bystander’s assumption would be correct. But as the article demonstrates, they are often on opposing sides to the determination of a particular claim.

Every claim which appears to be duly made and well-founded is (eventually — reaching this stage can take decades in some areas) publicised and representations can be made by anyone, including landowners, occupiers and other user groups. Where, as in the case of Tenchley’s Lane, the claim is entirely built on historical evidence (in other words, there is no current use to support the claim, but historical records are said to show that the claimed route was a highway of a certain status), objections will carry weight only to the extent that they add to or inform the interpretation of the evidence: a submission which for example, puts a different, weaker gloss on one piece of evidence, or new evidence which tends to negate the claimant’s. So representations that the way would be unsuitable for motor vehicles, or carriages, or horses, are irrelevant, unless there is evidence that the way was simply incapable of accommodating such users.

And when a user group (or indeed anyone else) submits a claim, it is quite common for a user group with different interests to object, and to seek to secure the rejection of the claim, or to promote the determination of the claim with different rights, typically to exclude motor vehicles, carriages or horse riders, but sometimes to show that ‘higher’ rights exist beyond those claimed.

It is unsurprising if user groups are alert to ensure that a claim does not under-record the rights on a particular route. Good research should ensure that any claim correctly reflects the supporting evidence, but PannageMan suspects that claims may occasionally be made by, say, walkers for footpaths or bridleways, where the evidence better suggests a restricted byway or byway open to all traffic, either because the claim might meet less resistance or because the claimants would resent the intrusion of vehicles consequent on the determination of the claim to confirm higher rights. In other words, ‘we’re going to claim this old road, but we want it only for [walkers][horse riders][horse-drawn carriage drivers] and not for [horse riders][horse-drawn carriage drivers][motorists]’ (substitute as appropriate).

A source close to PannageMan can reveal that half of New Years Day 2014 was dissipated in writing a rebuttal of an objection from the Ramblers to the claim for Tenchley’s Lane. The objection surprised PannageMan, because much of the claimed route was entirely ‘new’, comprising a sunken lane not recorded on the definitive map, running south off Limpsfield Chart down to Itchingwood Common. Another part lay along an existing drive. But a key part was coincident with what was recorded as a public footpath: a steep climb uphill along a modestly narrow path between fences. It was perhaps the last which had stimulated the objection, owing to concern about horses and pedestrians sharing the same path — although this is common enough elsewhere, there are far narrower bridleways even in Surrey, and people and horses get by (literally). Had the claim been successful, the width of the claimed lane ought to have required the close-set fences to have been set back, giving everyone more space.

The claim was rejected by the Planning Inspectorate, as the historical evidence was found just insufficient. The Ramblers’ objection was not the only objection, nor was it necessarily material in deciding the claim. But the outcome is that there is less access than there might have been for walkers, horse riders and cyclists, and volunteers’ time is spent unproductively on depreciating each others’ work. And one is left wondering whether user groups are most effective when they are engaged in sniping at each other, rather than in promoting more and better access for all. Is this what an ‘important victory’ should look like for a user group?