Trail Riders Fellowship v Secretary of State for the Environment, Food and Rural Affairs is a judgment of the High Court given in January in a challenge concerning what is often known as an ‘unclassified county road’ (UCR). The UCR in question is a country lane in Derbyshire, Bradley Lane, which runs between the village of Pilsley and the A619 in the valley below, 60 metres lower down. You can see the lane on the Ordnance Survey Explorer Map here, marked with green dots as ‘other routes with public access’ (ORPA), in the photograph below, and on Geograph here: 1, 2 and 3. 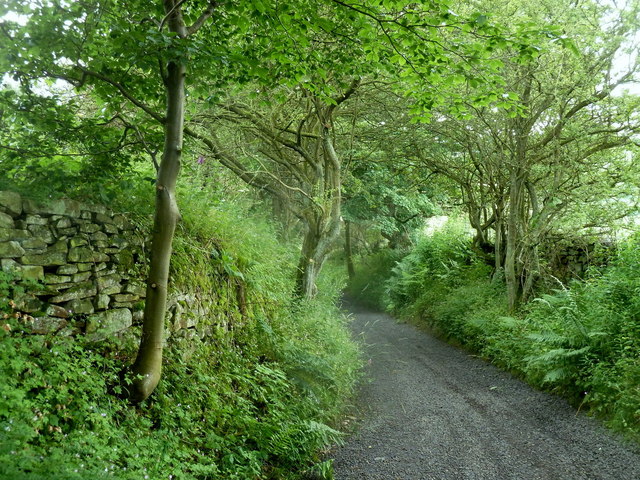 Bradley Lane: © Andrew Hill and licensed for reuse under this Creative Commons Licence

Bradley Lane was originally recorded on the definitive map and statement as a ‘Road used as Public Path’ (RUPP), a fix adopted by the National Parks & Access to the Countryside Act 1949 to record public ways in the countryside which appeared also to be used by vehicles. RUPP status allowed the way to be recorded as available to walkers and horse riders without any need for corroboration of public vehicular rights. Bradley Lane was more unusual, in that, long before it was captured on the definitive map as a RUPP, it was maintained by the former Bakewell Rural District Council as one of its local ‘roads’, and when responsibility for maintenance was formally transferred to Derbyshire County Council under s.30 of the Local Government Act 1929, Bradley Lane was shown on its ‘handover map’ as an ‘unscheduled other district road’, or what was to become known among the initiated as an UCR — a road which was of such lowly class that it was neither distinguished with a classification number, nor tarred during those years after the Great War when most public roads were given a sealed surface.

Strictly speaking, what was handed over at that time was responsibility for all publicly maintainable highways which were not already vested in the county council, including most footpaths and bridleways. But what both councils were really interested in was the extent of the road network, and the liability to maintain which was transferring from one to the other. So the rural district councils drew up handover maps, on which were marked in colour all the minor highways recognised as being maintainable at that time, sometimes distinguishing those which were tarred and those which were not. It follows that, because the transfer was not confined to minor roads, it cannot be concluded with any certainty that highways marked on the handover maps were carriageways: i.e.with a right of way for motor vehicles. But that seems generally to have been the intention, even if the maps represented no more than the experience and assumptions of the rural district council’s highways officer.

This court challenge sought to overturn the decision of an independent inspector, determining a definitive map modification order, to show Bradley Lane as a public bridleway (you can see the interim and final decision, including maps, on the planning portal, scrolling down for case reference FPS/U1050/7/66). The application for the order had been made by a member of the Trail Riders’ Fellowship, seeking to show the lane as a byway open to all traffic (BOAT). But the inspector, reviewing the historic evidence of status, concluded that there was insufficient evidence of vehicular rights, and (following two public inquiries) downgraded the outcome of the order to bridleway. The Fellowship was aggrieved, perhaps less because they disagreed with the inspector’s interpretation and balancing of the evidence (though they undoubtedly did), but more because their starting point was that, as a UCR with the history described above, that should strongly weigh the balance in favour of rights for vehicular use.

It is not hard to sense the Fellowship’s frustration with the inspector’s decision, and imagine that it will be still less happy with the court’s judgment. Much of the evidence for vehicular rights was circumstantial: the inclusion on the handover map, the exclusion from the first definitive map (presumably because Bradley Lane was then thought to be a road not appropriate for inclusion), the subsequent designation as a RUPP rather than a bridleway. And in each of those cases, the court concluded that the evidence could point either way. It was right about that — but they were all strong pointers in one direction. The judgment does not in itself affect the status of UCRs nationally. But it does undermine the expectation that most such UCRs, at least in the countryside, are carriageways, even if evidence is sometimes lacking. However, an expectation is all it ever was, and all it can be. Given that some UCRs are pretty certainly not carriageways, there can be no presumption that any particular UCR is one, for one can only assess the probability that a particular UCR is a carriageway, rather than draw a conclusion in a particular case on the basis of probability alone.

Counsel for the Fellowship had a go at undermining the inspector’s decision on the evidence, but in a challenge of this kind, it is not enough to convince the court that it might have arrived at a different conclusion: it is necessary to show that there was some error of law or irrationality. There was an attempt to assert that the expression ‘lane’ (in the name of the route, ‘Bradley Lane’) itself indicated a carriageway: there was some support for this approach in case law. But the court was unimpressed, and again, it seems the best that can be said is that a lane very often is a minor road running between two other roads — but not that it inevitably is so. (It is not hard to find exceptions, although an exception today may not necessarily have been an exception in the past.)

There was also some discussion of plans for the Manchester, Buxton, Matlock and Midlands Junction Railway. Such plans are often used in rights of way claims. A company proposing to build a railway needed a private Act of Parliament, and standing orders of Parliament required that the company must deposit, in addition to a Bill, plans of the proposed line and books of reference containing details of the land which might be acquired. Particularly during the years of ‘railway mania’ in the middle of the nineteenth century, many lines were proposed which never saw the light of day, but which progressed far enough to be deposited with Parliament, even if the Bill were thrown out, or the company withdrew (perhaps bought out by a competitor). In this case, the railway was clearly not built, but although the evidence is unclear, it appears that an Act for the railway was in fact given Royal Assent in 1848 (c.cxcii here). It may be that the plans were approved by Parliament, but perhaps the specific proposals for a line over Bradley Lane were withdrawn from the Bill. The inspector concluded that, “the railway was not pursued in this locality. This limits the weight that can be given to these documents.” The court agreed, and said, “Nevertheless, the plans were never put before Parliament and so there was no detailed consideration of the issue.” Either way, the comments are unhelpful: what mattered is that, regardless of the outcome, there was an extensive process of local survey and what today would be called consultation with owners, tenants and parish authorities, carried out by experienced surveyors, to inform the deposited plans. Whether, in fact, the line was built, or indeed, whether the plans were endorsed by Parliament, is very much a secondary issue, but on the face of it, the inspector, and the court, were too quick to dismiss the evidence.

The residents of Pilsley, and walkers and horse riders, may be delighted with the outcome of the order, and the failure of the court challenge, and it is impossible to say that either was in error. But one comes away with the sense that it could easily have been a different outcome, given a more sympathetic hearing from the inspector. Look again at the photograph above, and you’ll see, even today, a reasonably wide lane capable of accommodating a car: is it likely that such a way would not have been used by horse drawn carriages? That is at the heart of this case.